There aren’t a lot of people who complain about a visit to NOLA. There’s architecture, history, full-on ebonics, and a whole lot of alcohol. As my good friend Christine said, every weekend is a party in New Orleans, both among locals and visitors.

If you’re not yet aware, you can drink on the streets in New Orleans. In fact, you can even put your beer/cocktail/hurricane from a restaurant in a “go” cup if your party is ready to move on but you’re not quite finished. They have drive through bars where you can get mixed drinks, daquiris, and hurricanes on the go, and I’m pretty sure the “open container” law is nonexistent. They have some of the loosest DUI laws in the country, and getting an MIP (minor in possession) is like a rite of passage into adulthood.

But, hooligans and shenanigans aside, when four responsible and of-age adults spend a week in New Orleans together, it’s a grand old time! 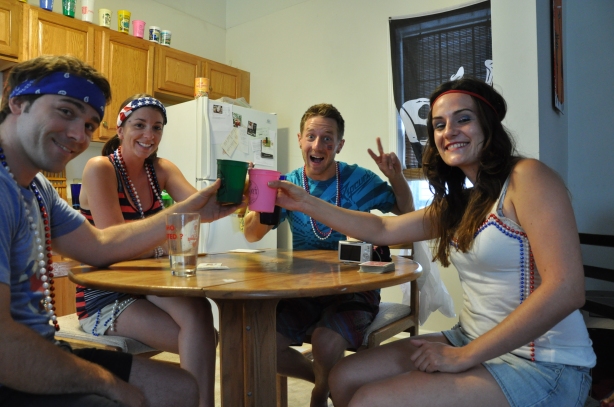 The Crew - aka - Quatrain

My friend Christine lives there with her boyfriend Scott, so Zac and I headed south from Missouri for an exciting week in The Big Easy. It was unbelievably hot, but surprisingly manageable. On our first full day there, we went running in a nearby park, wandered around Uptown, where they live, and checked out some of their local bars and eateries. We had our first Po’Boy, and hit the sac long before midnight.

The next day, we crossed over Lake Ponchartrain on the longest bridge over water in the entire world, and headed north for a day of tubing down the river.

It was a ton of fun, especially since I hadn’t seen my lovely Christine for over a year! Zac and Scott met a few times before, so they were happy to bro out over beers, and all was good in the world. We did end up hitting a storm towards the end of the trip, but we were already wet so it wasn’t a big deal.

After a day in the sun, we called it an early night so we could rest up for The Fourth festivities on Wednesday. On The Fourth, we wandered around The French Quarter, checked out the Market, and ducked into one of their favorite spots for some authentic N’awlins cuisine. We both got the chance to try Jambalaya, Gumbo, Crawfish Etouffee, and a few other items. That Etouffee was unbelievably delicious and I just wish I could make it myself!

All decked out for The Fourth

We managed to take a ferry across the Mississippi to watch the fireworks over the New Orleans skyline, which was definitely a view to savor. And, according to San Diego sources, we experienced a much better show than they did!

After the Fourth, we recovered on Thursday with some sightseeing. We started with the Ninth Ward, which is the area that had the most damage during Katrina, and is one of the poorest neighborhoods in all of New Orleans. It was pretty surreal to see some of the markings on the doors and walls showing the date the rescue workers finally made it there, and whether there were any survivors or bodies found in the house. We also could see lines on the some of the buildings that showed how high the water was.

There are quite a few, “Brad Pitt Houses,” which he came down and built as a way to help mobilize the community and breathe a little hope into the survivors. They were very unique looking, but all have very eco-friendly setups, including solar panels.

We also checked out a sculpture garden, ate some of the best barbeque I’ve ever had at The Joint, and visited the New Orleans Battlefield. I think that battle was a big part of…maybe the War of 1812. I guess I wasn’t paying very close attention though, unfortunately.

We rounded out our trip with a beach day at the Gulf Coast with Cooper! We went to the Mississippi side of the gulf. The water was definitely murky, possibly from the oil spill, but it was a nice day anyway. The sun was hot and the water was cool, the perfect combination.

Afterwards, we hit up Bourbon Street for our last night of partying. It was crazy packed, and there were people on balconies just tossing beads down. Zac got hit in the face and shouted, “I don’t even have boobs to flash!” Which was pretty funny, and better him than me!

On Saturday, our last day, we wandered around the French Market again, and picked up some cheap-o items we lost or broke over the last week – sunglasses for Zac and a wallet for me.We fought the rain all afternoon and ducked into The Napoleon House to try Christine’s favorite Pimm’s Cup and some cheese! Then we finally hit up Cafe Du Monde for the famous Beignets!

Christine made us unbelievably delicious Jambalaya from scratch for dinner, and we spent hours sitting on our computers swapping pictures, music, and laughs before we finally turned in for the night. New Orleans is a delightfully fun place, and I think a week was a good length of time. We kept missing out on a seeing the Voodoo Queen’s grave because we didn’t know the hours, but we definitely kept ourselves busy.

I can’t imagine how anyone else could ever have as much fun as this quatrain did, but you’re welcome to try!

The Quatrain Zipper on the Street Car